I spent some quality time in my old stomping grounds during the Canada Day weekend, revisiting a city that was my hometown for seven years. Seven years spanning a period in my life when I was a big-time lush. But it wasn’t spirituous beverages that brought me to Hamilton this time. All the bars in this city I frequented way back when have long since been demolished by the economic tsunami that hit the planet back in 2008, with the exception of two. One of those two was forced to close its doors because the building itself had been condemned – a turn of events that was completely unrelated to the recession. The city eventually had the property converted to a parking lot; I remember part of me died the day they brought in the bulldozers. The other actually survived that nasty storm and is still in operation to this day, but only because they sold their mortal soul and consented to becoming a miserable shadow of their former self.

Lack of historic watering holes aside, it’s always an interesting experience to return to a city you once inhabited after being away for a number of years, just to see how things have changed. Indeed, Hamilton has changed. A bit. Several businesses have predictably changed hands since I last set foot here. The downtown skyline is a little more manhattanized than it used to be. The new city buses are sleek and sexy as all shit, and handily beat the hell out of those boxy canary-yellow jobs that are presently being phased out. For a split second, I could have sworn they also got rid of the statue of Sir John A. Macdonald that stands on the eastern flank of Gore Park, but that turned out to be little more than a cannabis-induced paranoid reverie.

Whilst out on Sunday morning reacquainting myself with The Hammer (also nicknamed Steeltown, The Birthplace of Tim Hortons or The Armpit of Canada, that last nickname mostly used by stuck-up latté-sipping types from Toronto who for whatever reason think wheat gluten is a deadlier substance than Agent Orange), I came upon this street sign, and took a picture. This is where my main character’s surname ultimately came from. I guess I can say that publicly without getting sued. 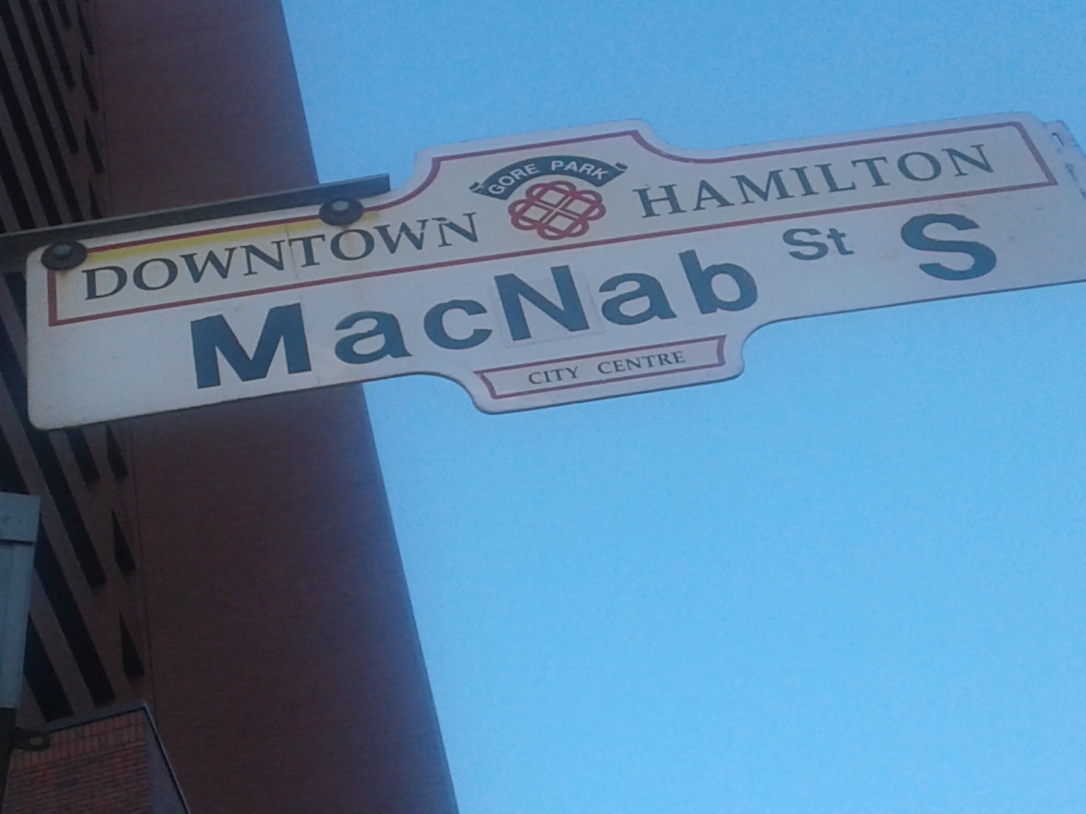 On October 17th of last year (a date that literally makes me weep as I write it), a land known as Canada – just Canada, with no funky-ass long form to it like the Kingdom of Canada or the Royal Canadian Confederation or the United Canadian Terryfoxadelic Provinces, because we wouldn’t want to be that much of a bother to everyone in formal diplomatic situations – became the second sovereign state on the third stone from the sun to legalize recreational use of the genus Cannabis nationwide, with only Uruguay (of all countries) beating us to the punch. I have always been proud to be Canadian. But on that day, I was four hundred and twenty notches prouder.

It hasn’t been without a few bumps in the road, though. Part of the reason why Canada is just Canada and nothing else is because she is a federation of ten provinces and three territories, each with its own character, regional preferences and prejudices, and in some cases, even its own language. Those provinces and territories tend not to see eye to eye on a lot of things. Which is why Canada is not the United This or the Republic of That, but just Canada. Any descriptive appellation as part of the long-form name is bound to rub at least one province the wrong way.

The aforesaid genus Cannabis and its derivative products, being one of those controversial things that not everybody agrees upon, would be something regulated by each province in accordance with its particular mores. Much like alcohol has already been regulated for as long as I can remember. Hence, the laws in Canada governing the finer points (like who can smoke and where, and how much one can possess at any one time, and all laws related to edibles) vary depending on what province you’re in, which brings us to the home province of yours truly: 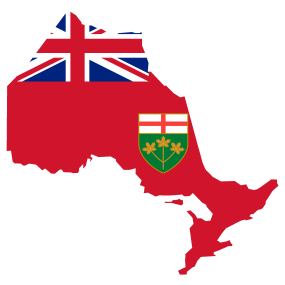 Ontario. Yours to discover. A place to stand, a place to grow, etc. Largest province in Canada in terms of population. Second largest in area. A land of contrasts. She has both farmland and tundra within her borders, and one hell of a forest. Home to boastfully cosmopolitan cities like Toronto and shamelessly racist hayseed towns like Ignace, and every flavour of community in between. Like all Canadian provinces, she has her own government. Currently made up of an unholy gaggle of doctrinaire mouthbreathers whose party affiliation shall remain unsaid for the sake of keeping the tone of this blog as apolitical as this tense political climate can possibly allow for.

It sure would be great if dispensaries were as common as liquor stores and vape lounges were as common as bars, but we haven’t reached that point in our societal evolution just yet. The mouthbreathers who sit in our provincial legislature won’t allow for such a flurry of economic activity, because The Children. It’s not just these mouthbreathers, either. The exact same excuse was used by the previous government to explain away the meagre number of stores they were proposing to open. The Children! Think of The Children! What kind of example are we setting for The Children?! None of these blasted political parties will grow a pair on this issue and implement some of that good old-fashioned common sense in their policies. Particularly not the current gang of idiots. A disproportionately influential percentage of that gang’s caucus and most ardent supporters are the type of people who believe Ontarians ought to be deeply ashamed of themselves for getting high on anything other than the love of Jesus…

London, a city of close to four hundred thousand people, is presently served by a single legal cannabis store. It didn’t open until April 1st of this year. They tell us more are coming, but not too many more, because The Children. I’m very fortunate to be living a city that even has one. Such a luxury is not afforded to residents of many other cities and towns across the province, who are forced to employ other methods to get their shit (and more often than not, the other methods so employed are the tried-and-true ones in use since long before legalization). What’s more, the one legal cannabis store in London is located on the opposite side of the city from the one I live in. It sure would be nice if there was a store right in my neighbourhood, or at least one in the next neighbourhood over, but like fuck that’s going to happen anytime soon. The Children!

Nevertheless, being the connoisseur of the herb that I am, it would only be a matter of time before I would make that trip to the other side of London to check out the store for myself, and maybe sample some of the merchandise if they have anything on offer that piques my interest. I got a kick out of the store’s address when I first googled it on my phone – 666 Wonderland Road North. A strong hunch flashed through my mind that one of the hyperreligious types who hold Doug Ford’s penis for him probably picked that address on purpose, to drive home the message that we’re smoking the devil’s cabbage. Like some caterpillar with a hookah. We should all be ashamed of ourselves. Deeply, deeply ashamed.

Walking through that front door with a complete lack of shame, I found myself in a narrow corridor, where there’s always somebody on duty playing the part of the bouncer, checking people’s identification and ejecting anyone not legally old enough. Once the bouncer gives you his or her blessing to proceed, you walk through a second door at the end of the hall leading to the main store, whose ambiance resembles some weird hybrid of a pharmacy and a fast food joint. There’s a menu behind the main counter just like one you’d find in a typical McDonald’s, save for the fact that the Big Macs and Quarter Pounders have been replaced with sativas and indicas and hybrid strains. Or capsules, if smoking is not your thing. Staff members armed with tablets punch your order into the central computerized queue once you’ve made your decision. You then pay your money and wait a couple of minutes for a staff member to bring out your ganja. Overall, I found the ordering process to be pretty painless.

Which brings me to the ganja itself.

First impressions? Well, it’s pretty plain as day why shit purchased legally has a tendency to be pricier than shit purchased by other means. Never mind the taxes. The packaging! A simple baggie isn’t good enough for the government. They must sell us our shit in packaging like this… 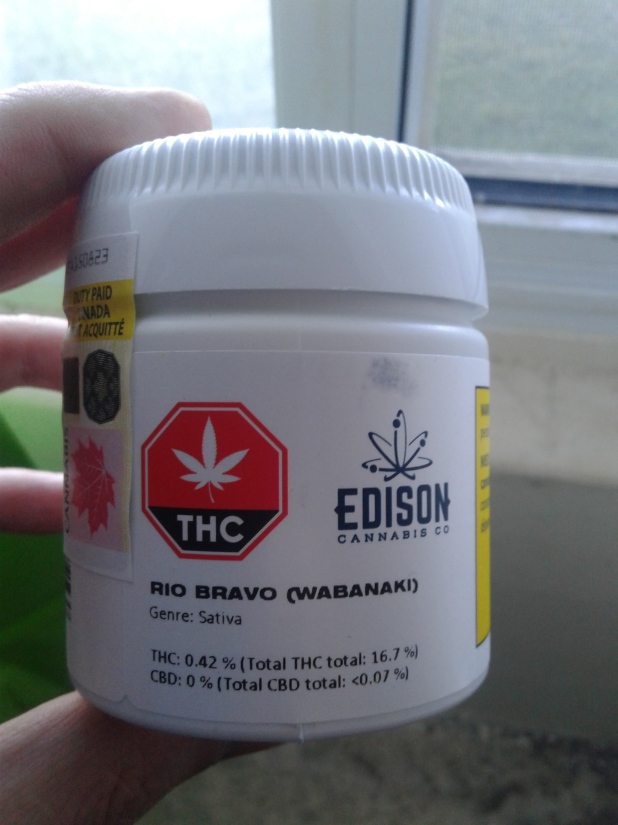 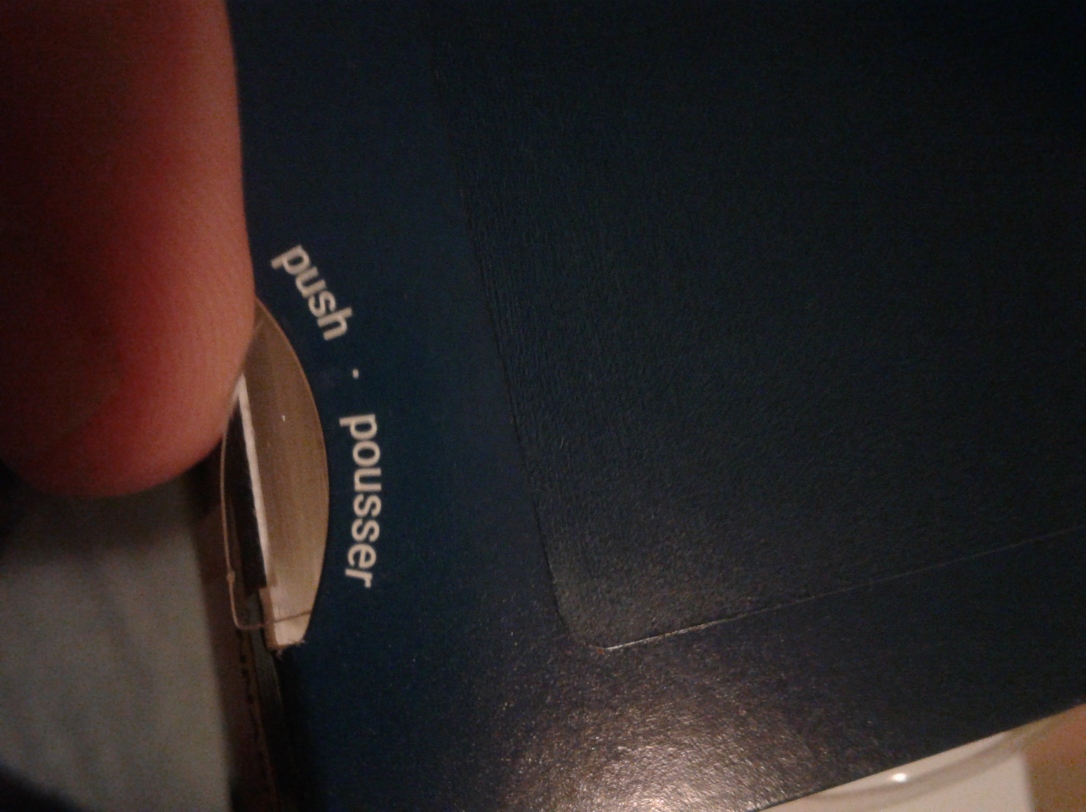 …and last but not least, my personal favourite…

I’m almost tempted to blatantly encourage people to continue to get their shit from their friendly neighbourhood dealer, just because it’s clearly the more environmentally friendly option. For chrissakes, people. We’ve all heard the statistics. There will be more plastic in the oceans than fish by the ides of this century unless a major attitude adjustment happens in our world. We can hardly expect this government to spearhead such an attitude adjustment. It has to be said that environmental issues occupy a very low rung on their list of priorities. Most of the people who own Doug Ford’s testicles subscribe to the belief that Jesus Christ is coming back to earth soon, and when he does, he will repair all the environmental damage we’ve inflicted upon the earth with his magical leprechaun powers. Just like this…

How was the high, you ask? Well, it was decent. Not exactly the most mind-blowing shit I’ve ever smoked. After all, this is Ontario and not British Columbia. But it was decent. I was inspired enough to drop some dope lyrics upon the Twitterverse…

I also had a sudden flash of insight about the book (to be elaborated on in a future blog post) while I was brewing coffee shortly after a wake n’ bake. So there’s that. Then there’s the kief. Many of these strains produced an impressive amount of it – enough for four more sessions (at least) after the main stash is ground and smoked. A word to the wise, though. Unless you’re a complete novice who will be impressed with everything, you might want to steer clear of the hybrid strains. I personally didn’t care for them. The high just felt like a nicer version of an ice cream headache. Whoever’s growing hybrids for legal distribution in this province needs to go to BC to learn how to do it right.

All in all though, I have to say I’m reluctant to get into the habit of buying legal bud with any degree of regularity, mostly because of the packaging. Specifically all the plastic involved in the making of said packaging. Can we not do something about that? Please? I fail to see why all that plastic is necessary. It takes some degree of practice to perfect one’s smoking technique – practice which we can reasonably assume the average eight-year-old hasn’t devoted one fraction of a second to. Many people don’t even feel a high when they try ganja for the first time. Yet spirituous beverages (which are demonstrably more damaging to a human body than the herb) can be readily consumed by any child who already knows how to drink milk, and I don’t see this or any other government tripping all over themselves to equip liquor bottles with child-resistant caps.

Clutching to a vellus hair in the asscrack of the universe, he doth layest his humble clutch of cosmick nits.